Sidney Hillman, the founder and president of the Amalgamated Clothing Workers of America (a predecessor union of Workers United, SEIU) is remembered as one of the greatest labor leaders in U.S. history. His tireless efforts to bring dignity and respect to working people left a lasting legacy for the American public.

An influential adviser to President Franklin D. Roosevelt, Hillman was instrumental in shaping the New Deal and landmark labor legislation protecting workers’ rights and living standards. He pioneered dispute resolution mechanisms that foreshadowed today’s grievance and arbitration procedures and largely as a result of his efforts, political action and education became a priority within the labor movement.

Hillman was born in Zagare, Lithuania, in the Pale of Settlement, on March 23, 1887 to Schmuel Hillman, a merchant, and Judith Paikin, a shopkeeper. At 14, Hillman was caught up in the revolutionary ferment then sweeping Russia. Leaving rabbinical school after less than a year, Hillman took a job and organized an illegal Jewish trade union. He joined the Bund. Arrested twice for political activity, he spent several months in Czarist prisons before moving first to Manchester, England, and then in 1907 to Chicago, Illinois.

As an apprentice cutter in Chicago, Hillman endured long hours and brutal conditions. In 1910, Hillman emerged a leading spokesperson in the citywide garment strike of 45,000 workers. In recognition of his role in the settlement, Hillman became a business agent for Local 39 of the United Garment Workers (UGW).

During the 1910 strike, Hillman also met his future wife, Bessie Abramowitz. Abramowitz was an important labor leader in her own right, having been one of the original leaders of the 1910 garment strike, and she remained active in the labor movement after their marriage in 1916 and the birth of their two daughters.

In 1914, dissatisfied with UGW’s leadership, a group of insurgent locals broke away to form their own national organization, the Amalgamated Clothing Workers of America (ACWA). At the founding convention, delegates chose Hillman as president. Under Hillman’s leadership, the ACWA established itself as the leading garment union in the country in the men’s clothing industry. The union pioneered popular educational and social programs for members, including a low-cost cooperative housing project and unemployment insurance.

The Great Depression of 1929-1939 strengthened Hillman’s belief in the importance of a strong partnership between government and labor. He was named to the Labor Advisory Board of the National Recovery Administration in 1933 and to the National Industrial Recovery Board in 1934. Hillman also worked closely with Secretary of Labor Frances Perkins to draft the Fair Labor Standards Act.

In 1937, Hillman pulled ACWA out of the AFL, joining John L. Lewis and others to found the Congress of Industrial Organizations (CIO). He was elected first vice president of the CIO in 1937.

In response to sweeping Republican gains in 1942, Hillman was appointed chair of the CIO’s new Political Action Committee (PAC). Under his direction, the CIO-PAC mobilized union voters in election districts all across the country and laid the foundation for a powerful political program and infrastructure-one that has endured, in one form or another, to the present day.

It was to be one of Hillman’s final legacies to the labor movement and to the country. In ill health for years, Hillman died in 1946 at his summer home in Point Lookout, Long Island, N.Y. 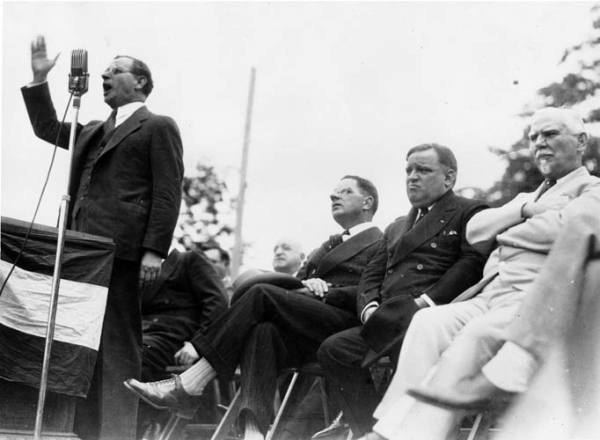 Speaking at a rally 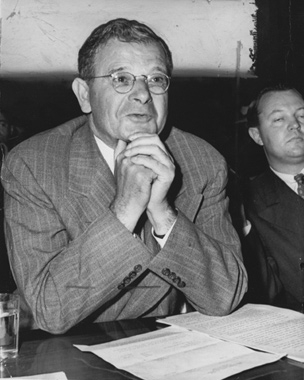 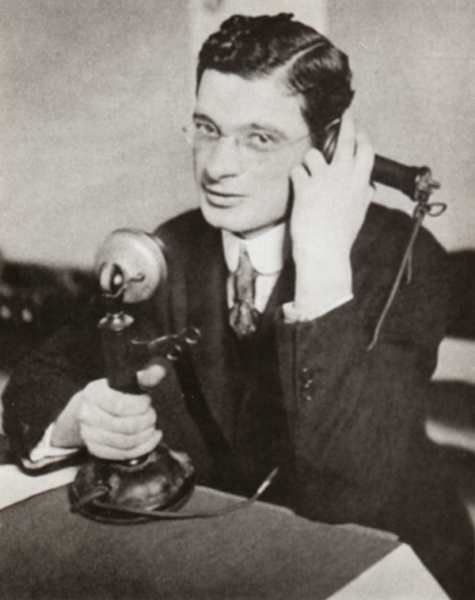 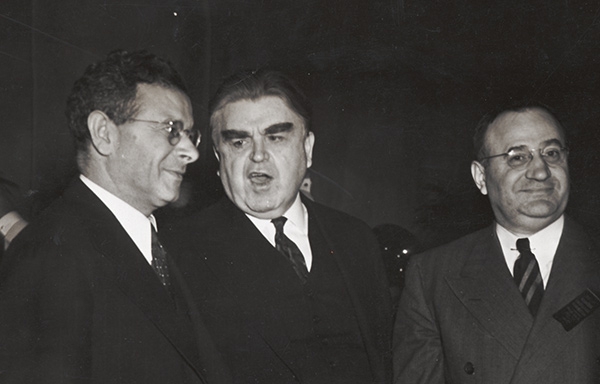 Sidney Hillman with Lewis and Rieve